4 factors you should check before hiring an aerial photographer

When you decide to hire the services of a drone company to operate in Spanish territory you should pay attention to some factors. In the event of any conflict, such as an accident or an impeachment, you, as the promoter of this aerial audiovisual project, would be considered an involved party. And in matters of airspace security, the consequences of not doing things well can lead to large fines. A good drone operator should explain you, before signing any contract, which are the legal limitations of a drone work.

The legislation on aviation security in the Spanish territory is regulated by the State Aviation Safety Agency, AESA, which depends on the Ministry of Fomento. Its regulatory framework is confusing in some points, probably waiting for the entry into force of a European legislative framework, so the sector is in a situation of some provisionality from its inception. And the press often confuses even more in this aspect. Therefore, we will try to explain in this little guide, without going into too many technical details, the fundamental axes that you should take into account before hiring an aerial photography company.

On Youtube, on Instagram, on Facebook, in the press and even on TV channels, there are often images and videos that violate air legislation flagrantly, without anyone doing anything about it. But that does not mean that we can do what we want. If you do not want to be involved in problems with the law, you should follow the minimum precautions that we advise you below.

1. Is legal the company you want to hire?

For a company to be enabled in AESA, it must meet certain requirements. Although that does not affect you, only for your knowledge you may be interested to know that these requirements are:

You may have read on many websites that an amateur can operate with drones without having to be a pilot, without having insurance, without being on the staff of any operating company and without having to comply with many of the laws that do affect the professionals. It is true. But the moment there is an employment or commercial relationship with him, and the images are used for commercial purposes, he will no longer be a mere amateur. In addition, considering yourself an amateur does not exempt you from fulfilling other standards.

2. Will the work be done inside or outside a completely enclosed space?

If the flight will be carried out in an industrial building, a sports hall, etc., or in an outdoor space duly covered with safety nets, they will not affect air safety laws. In this case, we must only have the permission of the owners, comply with any other legislation in force (right to privacy and your own image, for example) and follow the security rules dictated by common sense, depending on the circumstances . We must remember that a drone in operation can cause great physical damage in case of hitting a person, in addition to material damage.

3. Will all the conditions for the drone flight be met?

This section is the most controversial and would require an article in much more depth. But in a very general way (more details in the AESA regulatory framework) we can say that no aerial work of any kind can be done in these circumstances:

4. Are all the necessary permits available?

The airspace begins at the moment when an aircraft takes off from the ground. And the regulation of this airspace is the responsibility of the State Aviation Safety Agency, AESA, not in town halls or police stations. The police and public bodies are not trained to regulate the airspace, although of course they can be present at our place of operations, require the presentation of documentation, etc. and denounce or paralyze our work if they consider that we break the law.

It is not true, therefore, the rumors of the type “as the City Council or the Local Police has given me permission, I can fly without problems”. Neither private owners can give or deny permits to fly over their property (except in enclosed spaces, as we have mentioned before). Even if it is the garden of your home… from the moment we take off, we are no longer “on their property”.

As of today, only 2 cases are known in which AESA has issued permits to fly in special spaces, such as an urban area, an airport security zone, etc. so it does not seem realistic to consider – we repeat: as of today – the request for permits to AESA.

On the other hand, we must request permission or coordinate with organizations other than AESA to fly in:

We must also have civil liability insurance in force.

If necessary, there are alternatives to the use of unmanned aircraft:

All photographs and videos from our gallery of works are made following the legislation, either by using some of these alternatives, or else they were made prior to the current legal framework. 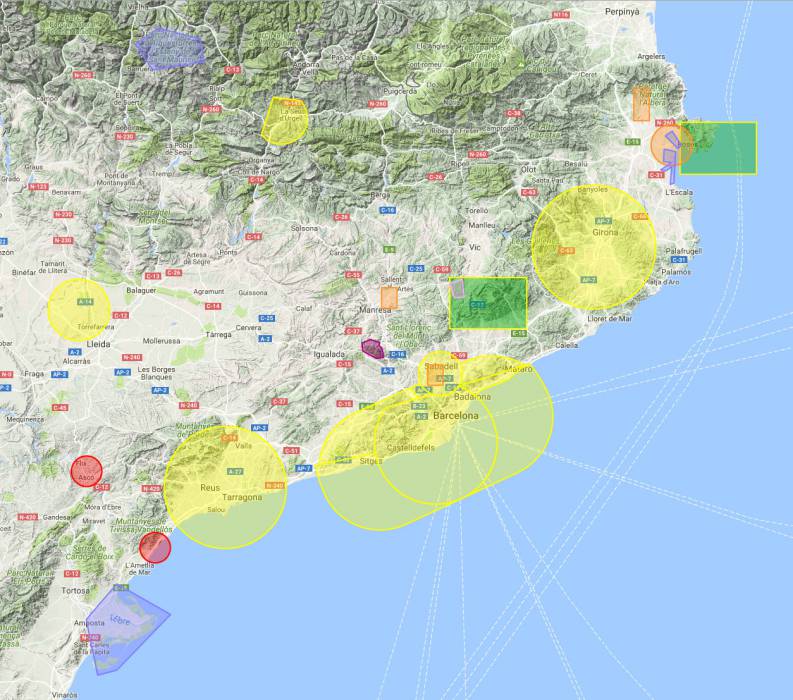 Map of prohibited areas in the flight of drones in Catalonia

Page load link
This site uses cookies. By continuing to browse this site you are agreeing our Legal Terms Ok